The visibility settings are used to specify if the layer and/or labels for a layer are shown at a certain map scale. Having scale-dependent layers is very useful to provide appropriate data views for the layer.

If you are using large datasets, you will avoid performance issues as the layer will start loading only when you are sufficiently zoomed in to view the objects on the map.

The visibility settings are set on each layer in the Publisher when preparing your map.

1. Open your map in the Publisher or create your map by drag and drop in the map window.

2. Right-click on the layer in the Layer Control and open the layer Properties > Visibility Ranges menu.

3. Check the Enabled box on the Layer and set the Minimum and Maximum. You can decide to set visibility ranges on the labels as well (similar actions). 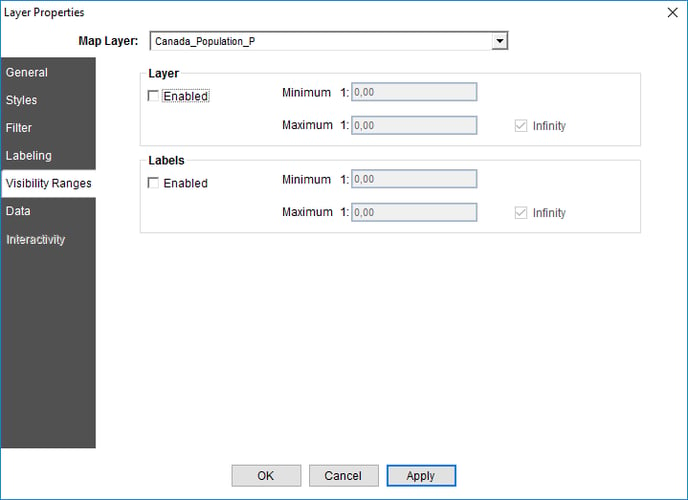 When enabled, if the Map Window scale is not within the Minimum and Maximum values, the layer will not display.

Minimum = minimum scale for which the layer is displayed. Below this scale, the layer will not be visible (inclusive)

Maximum = maximum scale for which the layer is displayed. At this scale and above the layer will not be visible (exclusive)

4. After publishing your map, additional information is available in the CartoVista Viewer Layer Control when a layer and its labels are not visible due to the Visibility Ranges.

The star indicates that the layer is hidden due to the visibility range. Change the map scale using the zoom-in or out to display the layer.

The star indicates that the labels are hidden due to the visibility range. Change the map scale using the zoom-in or out to display the labels.